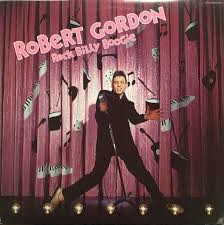 It's a wee while since we have had some Friday rockabilly
I spotted Rock Billy Boogie  by Robert Gordon among the floatsom and jetsom in the most chaotic CD section on the planet namely in BRICC in Ballantrae.
The name rang a vague bell so I took a chance, I vaguely recalled that there may be a connection with Link Wray and I was right as they recorded a record together in 1977.
Rock Billy Boogie is his third album from 1979.
He had been on the go for a few years before that as a member of New York punk band Tuff Darts but as a rocker at heart he took advantage of the Rockabilly revival in the late 70's - Stray Cats, Pole Cats, Shakin' Pyramids etc
Chris Spedding of Motor Bikin' fame is on lead guitar.

I'm off to look out my Black Slacks

Robert Gordon - I Just Found Out

Robert Gordon - I Just Met a Memory
Posted by Charity Chic at 08:00