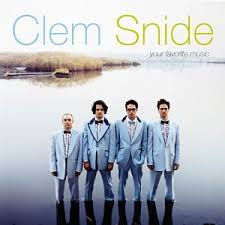 I picked up Your Favorite Song the second album from Americana band Clem Snide released in the UK on Cooking Vinyl in 2001 at the weekend in my local charity shop.
It was 3 CDs for a pound and I was struggling until the lady kindly went into the back shop and brought out some more of which this was one.
I  recognised the name and I thought (correctly) that I had some of their stuff on compilations.
It has jumped the queue of records to feature as I have actually managed to listen to it in its entirity.

The jury is out. In places it is a bit one-dimensional. Also a couple of pretty good songs are ruined by some background warbling. There are one or two that past muster but I'm not yet sure if it is a keeper.

They are named after a character who pops up in a number of books by William S Burroughs.
In Glasgow snidey is a word for someone who is a bit sneaky and untrustworthy  and a bit fly. Insert your choice of politician here.

The first song is somewhat apt given I have just joined a gym. I was using it for showers when the bathroom was out of order (it is now finally completed and looking good) and felt that I needed to do some exercise to address my evergrowing gut and general lack of fitness.
It may lead to a reduction in actity here as I juggle for time but hopefully not.