Girls in Peacetime Want to Dance 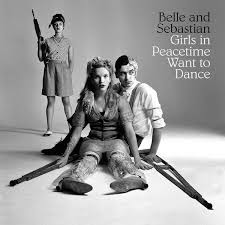 The last month or so has seen the doubling of the number of Belle and Sebastian records on the shelves.
Firstly The Life Pursuit was purchased in St Andrews. It was fairly swiftly followed by the purchase of Girls in Peacetime Want to Dance in Blairgowrie.
From 2015 on Matador records it is their ninth studio album and the first in five years.
It has more of a dance feel than its predecessors wth the introduction of synthesisers and dance grooves.
I've chosen the two singles from the album.
The frst one The Party Line  reached number 56 in Japan but did not chart elsewhere.
The second Noboday's Empire was somewhat more successful in that it reached number 36 - in Mexico.

As I said when posting The Life Pursuit it is somewhat better that I thought it might be given that the bands profile had slipped somewhat albeit both albums made the top 10 of the UK album charts - TlP reaching number 8 with GIPWTD peaking aaone place below at 9.

Belle and Sebastian - The Party Line

Belle and Sebastian - Nobody's Empire
Posted by Charity Chic at 08:00