State of the Union - Massachusetts 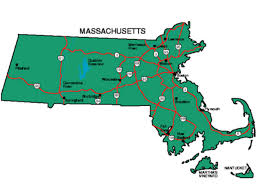 Thank the dear lord, the “band” Boston’s first album, called Boston, does not have a song on it called Boston. For some idiotic reason I would have felt duty-bound to include it here. And you’re not getting the obvious dirgey drivel from the Bee Gees. Instead, here it is by one of our now-favourite Czech singers, Václav Neckář:


If there was a place called Staying Alive I would have posted that song (is there a catchier riff anywhere in the entirety of popular music?)
Massachusetts claims to be the place that invented throwing a ball through a hoop suspended ca. 3m off the ground. And in Holyoke, Willie Morgan, many, many years before he played for Manchester United, invented a less rough game than basketball that was intended for older members of his local YMCA. A version of this game is on occasion played on some beaches in Brazil, for example, by exceptionally scantily-clad people.

You might now be able to discern, thanks to my witterings (as CC himself refers to them) that there will be no Massachusetts ICA. Such is the dearth of decent songs it might turn to be a Massachusetts 4-track EP.

There is this, though,  by our new favourite Estonian singer Jaak Joala:

And there is this piece of jangly americana:

Some readers might be too young to remember the next group:

And this is not a country song  despite the performer having a name that suggests otherwise:
Patti Griffin - Boston

This is track 8 on the Become What You Are album:
The Juliana Hatfield 3 - Feelin' Massachusetts

Allegedly Ms Hatfield is a fan of the music of Olivia Newton-John (well, who isn’t?) and The Police (utterly preposterous).


And there it is, the Massachusetts EP.

And saving the best ‘til last, Betty Chung warbles away in mandarin


You’re not getting the Ervinna version, it’s in a language we can all understand.

The state motto is something do with seeking peace using a sword.

The Walkmen -Lost in Boston
Posted by Charity Chic at 08:00