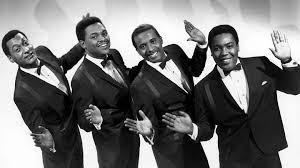 Levi Stubbs, Abdul "Duke" Fakir , Renaldo "Obie" Benson  and Lawrence Payton collectively known as the Four Tops were one of the great Motown Soul bands of the 60's

I was nearly ostracised by the blogging community for not owning anything by them for the longest while.
That was rectified with me purchasing a Best of on vinyl in Stanraer in the summer of 17.
In early October  this year it was joined by a CD version picked up in Granton-on-Spey.
Ok so all 12 tracks on the CD are on the vinyl album but you can never have too much of a good thing.
You could well say It's the Same Old Song but I Can't Help Myself.

Look out for the obligatory comment by Lynchie making us all jealous by regaling the time he was dancing in the aisles to the band.

The Four Tops - It's the Same Old Song

The Four Tops - I Can't Help Myself (Sugar Pie, Honey Bunch)
Posted by Charity Chic at 08:00