The Gospel According to Boo and Tony 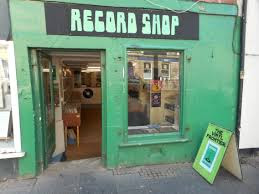 As I mentioned  in my Percy Sledge post I recently visited a record shop in the small East Lothian town of Dunbar.
Pulling into the main street with a view to exploring the charity shops I was beside myself with excitement to notice that there was also an imaginatively named Record Shop.
I got chatting to the guy behind the counter as I was handing over my cash and he said that they had been open for just over a year and are doing ok. There is apparently also another one Wall of Noise in the neighbouring town of Haddington.
Greatly encouraging stuff and hopefully we will get back to the day when every small town has a record shop again
Alongside Percy in the bargain bin were two singles by 80's band The Bible. I was heading towards the counter when I noticed their 1986 debut album Walking the Ghost Back Home on which they featured and decided to upgrade.
I wasn't too familiar with their work but I have a copy of a Boo Hewerdine album together with stuff he has written for Eddi Reader and Heidi Talbot.In The Bible he is joined by Tony Shepherd on keyboards, drums and percussion
It is of it's time but at four quid I'm putting it down as a find.

The Bible - Mahalia
Posted by Charity Chic at 08:00