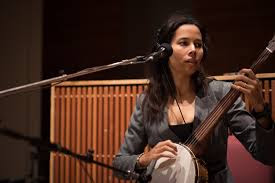 We've made it! 2016
So that is two or three songs from all the Sunday Herald Celtic Connections CDs from 2007 -2016.
There haven't been huge numbers tuning in to this series but for those  that have I hope you found something to enjoy

Two artists today who have gone on to form successful solo careers after leaving bands
Rhiannon Giddens was lead singer, violin and banjo player in Carolina Chocolate Drops prior to going solo.
This track is from her 2015 album Tomorrow is my Turn.
Jason Isbell is no stranger to this blog both as a solo artist and as a Drive-By Trucker. He just seems to get better and better as this song from his album Something More Than Free demonstrates.

Finally the traditional song this week from Boreas  (blurb) an enchanting musical union between Scotland and Norway.Hardly surprising then that this song is about fishing in the North Sea

Something different next Saturday once I think of something