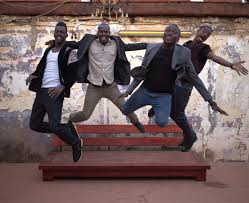 The penultimate offering as we reach 2015 and another veritable mixed bag for you to hopefully enjoy.

Let's start in Timbuktu with a terrific song from desert punk/blues band Songhoy Blues.
They were forced from Timbukto to Bamako  the capital of Mali due to the civil conflict there and the introduction of Sharia law. They have since built an international following .Hardly surprising really given the quality of songs such as Soubour

Somewhere nearer to Glasgow than Timbuktu is the probably safer (except on Saturday nights) and less exotic (always) town of Penicuik, Midlothian perhaps most famous for a double glazing company with the same name. It is also the home of folk singer Siobhan Miller who's 2015 album Flight of Time on Vertical Records features and is produced by James Grant of Love and Money fame

Finally an Americana artist whose work I need to explore in some more detail. Here is Patty Griffin with a song from her 7th album American Kid recorded as a tribute to her late father.

The final installment next week

Siobhan Miller - Drowning Out The Sorrows

Patty Griffin - That Kind of Lonely
Posted by Charity Chic at 08:00