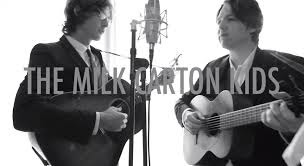 We start with the 2010's answer to Simon and Garfunkel - from Eagle Rock, California Kenneth Pattengale and Joey Ryan known collectively as The Milk Carton Kids as Pattengale and Ryan doesn't trip lightly off the tongue.
Some lovely harmonies here on Hope of a Lifetime from The Ash and Clay.

Georgia Ruth Williams singer and harpist from Aberystwyth first came to my attention via The Robster's brilliant Welsh Wednesday series. This is from Week of Pines the winner of the Welsh Music Prize for 2013.

For the traditional spot we have the band who vie with Runrig as the best known Scottish traditional band Capercaillie.
They are obviously much better than Runrig,
From Taynuilt, Argyll they were formed by Donald Shaw who coincidentally is also the Artistic Director of Celtic Connections. They are fronted by his wife the lovely Karen Matheson.
This song translates as The Spinning Song and you can imagine it being sung by the weavers as their looms
weave the Harris Tweed

The Milk Carton Kids - Hope of a Lifetime