The Bard of Dundee 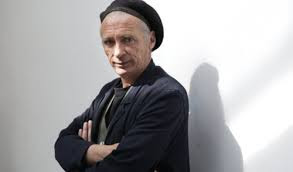 Michael Marra - singer,poet,artist, playwright, Dundee United fan and all round good bloke died on 23rd October 2012 at the tragically young age of 60 shortly before CCM took to web and I  thought it time to pay him the homage he deserves.
He was featured in a terrific Artworks programme on BBC Scotland which amongst other things featured a boat he was constructing in his back garden from various waste bits of wood.
He was in the cult Dundee band Skeets Bolivar (of Shithouse Door fame!)
His most famous songs are probably Hamish the Goalie -a tribute to the great Dundee United goalie Hamish McAlpine and Flight of the Heron the story of Gil Scott Heron's father who was one of the first black footballers in Scotland when he played with Celtic.
He is also the author of the mighty Hermless which was once touted on an alternative list for Scotland's National Anthem - it would get my vote anytime!

Hermless, hermless, There's never nae bother fae me
I ging to the libry, I tak' oot a book
And then I go hame for ma tea


The Songs featured here are Posted Sober the title track from the album of the same name and a track from Houseroom an EP he recorded with the Dundee band The Hazy Janes which includes his son Matthew and daughter Alice.

A true genius and a sad loss.