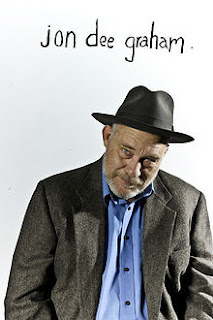 For a wee while I've had an urge to post some Jon Dee Graham and in particular $100 Bill the first track from his 2007 debut  solo album Escape from Monster Island.
So here goes.
A true legend on the Austin Music scene he was a member of The True Believers with Alejandro and Javier Escovedo, has had at least 8 solo albums and has played lap pedal steel guitar on a wheen of others.
His voice puts me in mind of a tuneful Tom Waits and he writes some excellent lyrics such as these.
I've got the above album and his 2001 Hooray for the Moon - both well worth checking out.
He may well feature again at a later date.