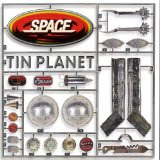 On a recent visit to Glasgow regular commenter George bequeathed Tin Planet by Space to the Charity Chic  vaults.
It's a completely bonkers record!
By way of retaliation I gave him the spare copy of the Sleepless in Seattle soundtrack destined for recycling to the Charity shop.
I'm unclear as to who got the best from that deal - him I suspect given that he got the previously featured splendid Gene Autry track

Space - A Liddle Biddy Help From Elvis
Posted by Charity Chic at 20:00