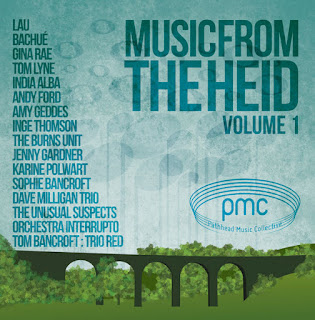 The village of Pathhead just south of Edinburgh received a Creative Places Award in 2013 from Creative Scotland.
One reason is the Pathhead Music Collective containing such luminaries as Karine Polwart and Lau.
Their free sampler CD popped through my letter box yesterday and you can get your copy here
It is a pleasant mix of folk, jazz, traditional music and not so traditional music.

First up is The Burns Unit a Scottish Canadian super  group containing Karine Polwart, Emma Pollock, King Creosote, Kim Edgar, Mattie Foulds, Michael Johnston and MC Soom T who does the Bhangra rapping here.
Following on is Inge Thomson, originally from Fair isle in Shetland, who plays a number of strange percussion instruments in Karine Polwart's band and who is married to Martin Green of Lau

The Burns Unit - Send Them Kids to War