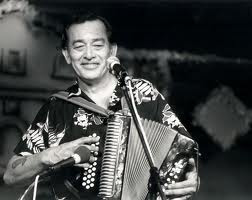 We have finally reached the penultimate week and I make no apologies for again featuring the inspiration to this series the great Flaco Jiminez who first graced the pages of CCM on April 11th on Accordion Crimes here
He subsequently appeared in Mexican Monday 2 here as part of the Tex Mex supergroup the Texas Tornados
These tracks are taken from his 1992 album Partners, where  as well as flying solo he is joined by such luminaries as Stephen Stills, John Hiatt, Ry Cooder, Emmylou Harris and Los Lobos.
First up is a solo mission -the wonderful Marina
Next he is accompanied by the lovely Linda Rondstadt, yet another artist with Mexican roots.I have a tremendous vinyl album of her's Mas Canciones which would have featured if I had the technology.(As would Flaco's Arriba El Norte).
Lastly he is joined by Dwight Yoakam performing Warren Zeavon's Carmelita. Absolutely nothing to do with Mexico, but the best track on the album.
I've got about half a dozen versions of this song downloaded but this is the DEFINITIVE version -even better than the late great Warren Zeavon's.(reminds me - he needs to feature in the not too distant future)
One week to go!