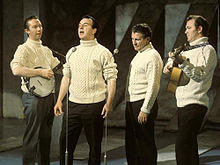 When I was growing up my folks had an extremely meager record collection which my brothers and I have  since more than made up for.
There were a couple of Shirley Basseys, Val Doonican, the odd Beatles single, a Fiddlers Rally, some classical and The Clancy Brothers and Tommy Makin.

Here Tom, Paddy and Liam  Clancy together with Tommy Makem give it laldy with a live version of probably their best known song.
When Liam Clancy met Bob Dylan, his Bobness proclaimed that the Bruvvers were his heroes. High praise indeed!
Looking for Swiss Adam, the resident expert on fishermen's jumpers, to pass comment on the Aran sweaters
I've pictures of me and my brothers in similar attire back in the day.

If Thurlman who was most taken by the Dubliners is still out there, this one is for you