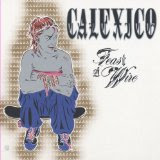 Nine weeks in and it is time for a bit of Calexico.
Originating from Tuscon, Arizona,  Joey Burns and John Convertino have had a reasonable degree of success since departing from Howe Gelb's Giant Sand.
Calexico's sound was recently accurately described by Walter as desert noir but these is also a distinct Latin and mariachi feel to their music.
I have heard their 2003 album Feast of Wire described (by George) as the greatest album of all time and whereas this may well be a slight exaggeration (he is often prone to them) it is a fine fine album.
Along the same lines as Alejandro Escovedo's Across the River, the two tracks  featured here depict the struggle and the inherent dangers associated in getting across the border ,or indeed Across the Wire

Calexico - Across The Wire

Calexico - Close Behind
Posted by Charity Chic at 18:22