No Reason to my Cataloguing System 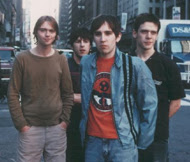 In most collections Astrid would be catalogued in alphabetical order next to yesterday's featured artists Aswad - but not on the CCM shelves - oh no.
Astrid are filed under Indie/Pop and Aswad on the other side of the room under Reggae.
However as No Reason the Astrid CD  I now have is a single it is filed in the strictly alphabetical CD singles section. It would be adjacent to Aswad if  I had any of their singles but is in fact in between Asian Dub Foundation and Attic Lights. Glad we cleared that up.
I had vaguely heard of Astrid a Glasgow band with strong ties to the Isle of Lewis. I then saw a terrific documentary on BBC Alba about their singer Willie Campbell who left the band after mental health and alcohol problems returning to Lewis where he has successfully re-built his life and is now playing music again.

From 1998 and recently purchased in Callander a tourist town in the Trossachs it is a rather splendid piece of indie pop.
My burning software has erroneously attributed this to Shetland musician Astrid Williamson so apologies if her name pops up.