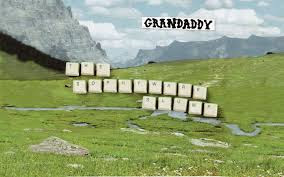 Until recently the only Grandaddy record I had was The Broken Down Comforter Collection which is pretty patchy at best.
It kind of put me off acquiring any more of their stuff although. I have often seen their second studio album from 2000 The Sophtware Slump and swithered about purchasing it.
I finally took the plunge in a charity shop in Callander and I'm glad I did as it is infinitely better than TBDCC.

Another cataloguing conundrum in that I currently have them filed under Americana whereas they clearly have much more in common with bands such as Mercury Rev and The Flaming Lips who currently reside in the Indie/Pop section.
They are shortly scheduled to release their first album since 2006.