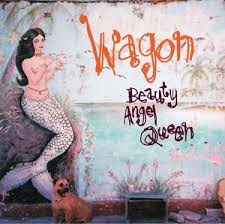 A further visit to Stranraer yielded another couple of slices of Americana.
Wagon was a name mooted by The Swede when he was trying to guess what was coming next in the recent series.
At the time the name didn't mean much to me but I subsequently discovered that I have at least a  couple of their tracks on various Americana compilations (of which I have many)
Therefore when I saw Beauty Angel Queen going for 75p it was a bit of a no brainer. The fact that it was on the mighty Glitterhouse label sealed the deal.
From St Louis I don't know much about them other than that they appear to have at least two other albums No Kinder Room and Anniversary

The final slice (for now at least) next Saturday

Wagon - Everything She Owns