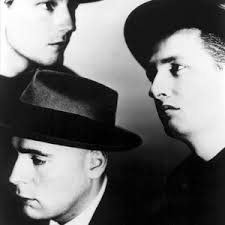 We are off to Dundee today to catch up with Danny Wilson - no not the dodgy Rangers centre half but the sophisti- pop (no, me neither) trio of Ged Grimes and brothers Gary and Kit Clark.

According to the usual font of all knowledge the loosely affiliated sophisti-pop movement was big in the late 80's and included such acts as Deacon Blue and Swing out Sister. So there you go.
Danny Wilson had a big hit with Mary's Prayer and then a couple of years later a reasonable hit with The Second Summer of Love
Gary Clark went on to make a name for himself as a songwriter and producer, Kit Clark went on to play with the Swiss Family Orbison and Ged Grimes got a gig as bassist for Simple Minds.

There have of course been the obligatory reunions

Danny Wilson - A Girl I Used to Know
Posted by Charity Chic at 08:00