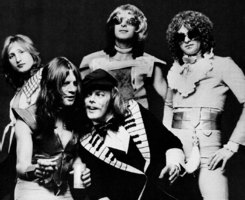 Glam rockers Mott the Hoople have featured before back in the early days of CCM and it is about time they featured again
Although they were on the go from 1969 to 1980 with the obligatory reunions they peaked during the early 70's with the classic line up around 1974 pictured above  of Dale "Buffin" Griffin , Ariel Bender,  Morgan Fisher, Overend Watts and Ian Hunter.
Sadly drummer Buffin finally lost his child like dreams dying in January this year at the age of 67

Mick Ronson got briefly involved and when he and Hunter left in 1975 they renamed  themselves Mott but were never the same again.
They did leave us with some cracking songs though

Mott the Hoople -All The Way From Memphis