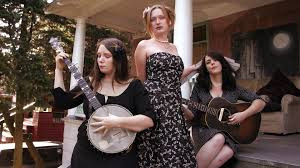 Week 5 and I am going to alternate from the traditional to the modern.
Like yesterday's offering some of the genre edges have been slightly blurred as we feature Vancouver band The Be Good Tanyas.
Surely they are Americana or perhaps even folk I hear you cry.
In my defense these two tracks prominently feature banjos (there you go kevinpat and George) and I am on record as stating that some of these posts may be somewhat tenious and spurious.
Taken from their 2000 debut Blue Horse

What cannot be argued about is the quality of the music,
Enjoy
More bluegrass (of sorts) next Monday

The Be Good Tanyas - Lakes of Pontchartrain

The Be Good Tanyas - Oh, Susanna
Posted by Charity Chic at 08:00