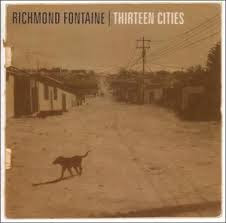 For those of you who like your Americana raw and gritty Thirteen Cities by Richmond Fontaine should be right up your street.
A road trip through the underbelly of America as far removed from Hollywood glamour as you are ever likely to get.
There is a map of the 13 cities on the inner sleeve which appears below 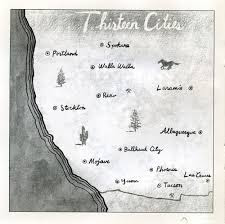 It's not the easiest to read so I will name them from top to bottom
Spokane, Portland, Walla Walla, Laramie, Reno,Stockton, Albuquerque,Bullhead City, Mojave, Phoenix, Los Cruces, Yuma and Tuscon.
Sounds like my kind of road trip.

I've drawn the line at posting $87 and a Guilty Conscience That Gets Worse the Longer I Go and I Fell into Painting Houses in Phoenix, Arizona as frankly they are too depressing and harrowing even for me.
Enjoy!

Richmond Fontaine - A Ghost I Became