The Other Man's Grass is Always Greener 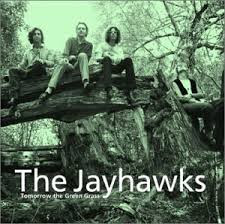 A week or so ago Brian featured Blue by The Jayhawks as number 9 in his epic Top 100 Songs of the 1990s.
This led to a debate in the comments section as to the relative merits of the various Jayhawks albums.
The general consensus (ie Brian and me!) seems to be that Hollywood Town Hall is the go to Jayhawks album.
It was also agreed that Tomorrow the Green Grass, the album Blue features on, is by no means a bad album, but that it is not as good as HTH.
To confirm this I have given TTGG a re-listen and the above assessments are quite correct.

This follow up album was released in 1995 three years after HTH. There are a couple of personnel changes.Karen Groberg on piano and Wurlitzer joins the band. Don Heffington replaces Ken Callahan on drums but does not feature on the album cover.Ms Groberg does but at a considerable distance from Messrs  Pearlman, Olson and Louris!
Miss Williams' Guitar is an ode to Victoria Williams, Mark Olson's then girlfriend and subsequently his wife. He left the band shortly thereafter (briefly reappearing between 2009 and 2013) to form The Original Harmony Ridge Creekdippers with her.

The Jayhawks - Nothing left to Borrow