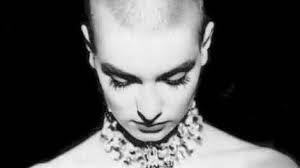 My sister-in-law recently passed a record library sale copy of Sinead O'Connor's 2003 album She Who Dwells in the Secret Place of the Most High Shall Abide Under the Shadow of the Almighty my way.
A double album whose title trips lightly off the tongue and which contains a mixture of demos, covers, traditional songs plus a live side recorded in Dublin.
There is a fairly eclectic series of covers including  a three in a row of Love Hurts, Ain't it a Shame and Chiquitita.
A song from each side for your listening pleasure (or maybe not)
Claim to fame. Mrs CC's cousin Anna was at school in Dublin with Sinead O'Connor. Apparently she was very quiet - Sinead that is, not Anna!