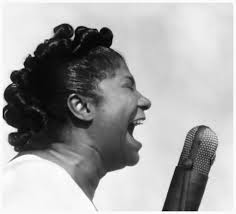 Some gospel for you good people today courtesy of The Queen of Gospel herself Mahalia Jackson.

Described by Harry Belafonte as the single most powerful black woman in the United States she performed at both President Kennedy's inauguration and Dr Martin Luther King's funeral. At her own funeral in 1982 Aretha Franklin did the honours
Unlike many of her contemporaries who began singing in the church she resisted the temptation and the associated fame and wealth of secular music.
She played an important part in the Civil Rights movement performing a concert in Montgomery in 1956 despite death threats and subsequently frequently appearing and singing at Martin Luther King rallies.

Bought in Skye, one of the bastions of The Free Church of Scotland (known as the Wee Frees) a particularly dour, intolerant and strict Presbyterian bunch who frown on any enjoyment and who chant psalms with no music as music would be too frivolous.
They would do well to take a page from Mahalia's hymn book.

Mahalia Jackson - I Want to Rest
Posted by Charity Chic at 08:00