Squeeze Me Please Me 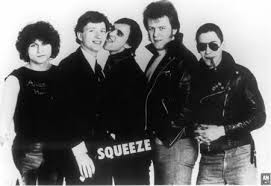 For me Squeeze have always primarily been a singles band. Over the years I have acquired a couple of Best ofs but have never really felt the urge to explore their studio albums in any more detail.
This is probably pretty short sighted on my part as the songwriting skills of Glenn Tilbrook and Chris Difford almost certainly guarantee that there are a couple of gems out there that have escaped my attention.

This post has come about as Pulling Mussels (From the Shell) earwormed  its way into my head the other day. However this has already previously featured so I have selected a further two from their fine back catalogue of singles.
They have recently released Cradle to the Grave their first album in five years.

Squeeze - Up The Junction

Squeeze - Black Coffee in Bed
Posted by Charity Chic at 08:00