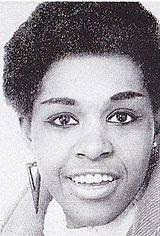 No discerning record collection should be without Dave Godin's Deep Soul Treasures - Taken From The Vaults Volumes 1 to 4 on the mighty Kent Label.
I have  copies of Volumes 1 to 3 from friends and returned the favour by purchasing Volume 4
Dave Godin  was an English fan, ambassador and promoter of American Soul Music and coiner of the term Deep Soul.
One hundred terrific songs spread out over four albums- some rare and some not so rare many of which have previously featured on my Southern Soul Sunday series.
Today I have gone for two previously unreleased 1967 numbers  featuring Jaibi the stage name of Joan Banks (1943-1984)
Her second husband was Larry Banks and they appear together on the first track as a duo billed as Lawrence  & Jaibi. She appears in her own right on the second.
A true talent.

Jaibi - It Was Like a Nightmare
Posted by Charity Chic at 08:00