A Bit of a Wobble 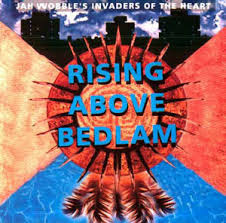 Over the last few days I have felt the urge to share some Jah Wobble with you and in particular some stuff from the fine 1991 album by The Invaders of the Heart that is Rising Above Bedlam.

Bedlam is defined in the dictionary as a scene of uproar and confusion and derives from reference to The Bethlem Royal Hospital, London the first hospital to specialise in the mentally ill.
Bedlam has also been the name of three rock bands (one featuring Cozy Powell), a song by Californian surf band The Bel-Airs and an EP by metal band Twilighting

Here Mr Wobble does his level best to rise above the uproar and confusion and pretty much succeeds.

Jah Wobble's Invaders of the Heart -Rising Above Bedlam

Jah Wobble's Invaders of the Heart - Everyman's An Island
Posted by Charity Chic at 08:00