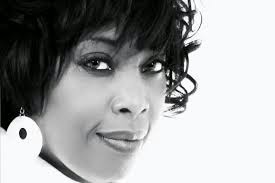 I picked up The Best of Ruby Turner for a couple of quid in a Charity shop the other week.Quite why anyone would give up a record as good as this is beyond me.
Still, their loss and very much my gain.
It is from 1995 and so pre-dates her association with Jools Holland.
It contains a mixture of her versions of the standards together with some other less well known singles by her.
We start with I'm in Love from 1986 which reached number 61 in the UK charts. it also reached number 9 in New Zealand - Ruby appears to be big there.
This is followed by her quite awesome version of I'd Rather Go Blind from 1987

As the Guardian rightly wrote Ruby Turner is truly the genuine article. Blessed with a voice that can breathe life and meaning into any song, whether it be a passionate ballad or a fast groove

Ruby Turner -I'd Rather Go Blind
Posted by Charity Chic at 08:00