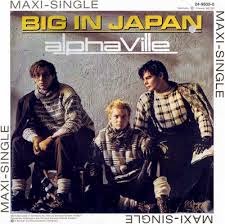 Like most bloggers I take an almost obsessional interest on my viewing figures.
Mrs CC often asks are you Big in Japan? as I head off to check the numbers.
The truth is I don't really know - Japan used to feature in the 10 most popular viewing countries but no longer does.
I know that I still get quite a few hits from Japan so if you are out there let me know.

Big in Japan was Alphaville's only hit single in the UK entering the charts on 18th August 1984 prior to charting for 13 weeks peaking at the dizzy heights of number 8. It was only  when looking up this information that I discovered that they were in fact German.

It's a small world -but I wouldn't like to paint it