Party For The World 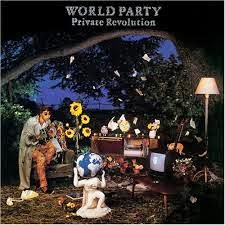 A few years ago I picked up a batch of CDs at a record library sale.
One of them was Private Revolution by World Party. I think I may have given it a cursory listen at the time and then filed it away.
I was reminded of this recently when Brian of Linear Tracking Lives! fame posted one of their tracks as number 98 in his soon to be legendary Top 100 tracks from the 1990s.
This prompted me to give it another listen and I'm very glad I did as it is a pretty good album.
It is their 1986 debut after Karl Wallinger left The Waterboys and it is effectively him, some session musicians and Sinead O'Connor providing some backing vocals.
To these ears I can hear shades of both Dylan and Chuck Prophet on the  first track I've posted whereas the second would not be out of place on Exile on Main Street.
In line with Brian's comments I may well explore their next two albums further

World Party - The Ballad of the Little Man