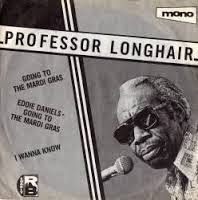 When you are born in Bogalusa, Louisiana it is perhaps inevitable that you will eventually become a boogie woogie pianist and indeed that was the fate of one Henry Roeland "Roy" Byrd better known as Professor Longhair.

He began his career doing rhythm and blues but over the years he slowly graduated towards jazz.
These songs are taken from a concert at the New London Theatre, Drury Lane, London on 26th March 1978 and he is accompanied by Alfred "Uganda" Roberts on Conga Drums.
We start with his version of the Ray Charles classic Mess Around.
We  then have some tremendous whistling as he pays tribute to Erik Bartlam's favourite town New Orleans on Go To The Mardi Gras
Sadly he (Professor Longhair not Erik ) died fairly shortly after this concert in January 1980 at the relatively young age of 61.Happily, Erik is still going strong.

Professor Longhair - Go To The Mardi Gras
Posted by Charity Chic at 08:00