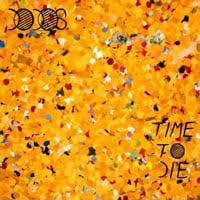 From the cover I had absolutely no idea as to who this CD was by and had to resort to the small print in the liner notes to find out.
These tell me that the squiggles in the top left hand corner actually form the word Dodos. Once you konw it's pretty obvious but I don't think I would have worked it out without help
The Dodos are an indie band from San Francisco consisting of  Meric Long on vocals, guitar , keyboards, piano and banjo and Logan Kroeber on drums and percussion.
They have released 8 albums since 2006 with this one Time to Die being their third album from 2009 on the Frenchkiss label.On this one they are joined by Keaton Snyder on vibraphone
That's pretty much all the information that I have which means that the post featured the other album by the band which the Swede also put my way will be even shorter than this one.
At the moment I have no plans to jettison this one.
The Dodos - Fables
The Dodos - Troll Nacht
Posted by Charity Chic at 08:00