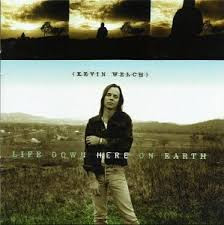 The fifth installment is another artist that I was not familiar with Kevin Welch with his 1995 album Life Down Here On Earth on the Dead Reckoning label which he formed with some fellow musicians.
It is a bit more mainstream than the others I have featured and on the first listen has not left a lasting impression. At the moment I'm not sure if it is a keeper.

The first song suggests that Bob Dylan is a big influence and I'm sure I have someone else singing the second one somewhere.The rest are pretty forgettable.