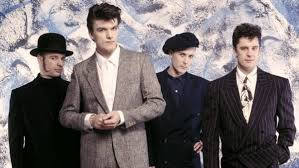 The other day I played The Boomtown Rats primarily because of their close alphabetical proximity to Bowie on the vinyl shelves. As you can imagine that area of the shelves has seen fairly heavy traffic in recent days.
At the time I stated that it could have been worse as it could have been The Blow Monkeys. I was gently taken to task by Drew and more forcefully by Echorich. Mrs CC also got in on the act given that the three Blow Monkeys records on the shelves belong to her.

Having given them a listen I have to admit that I was wrong there. These two songs are far better than the two featured Boomtown Rats numbers previously offered

The Blow Monkeys - Digging Your Scene

The Blow Monkeys - It Doesn't Have To Be This Way
Posted by Charity Chic at 08:00