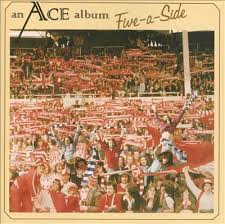 Another one from the murky corners
Given that the classic format of an LP is 5 tracks per side (as per the Imaginary Albums of Vinyl Villian fame) it was probably only a matter of time before a band came up with an album of that name.
Step forward Ace with their debut album on Anchor Records from 1974.
They were formed in Sheffield in 1972 as Ace Flash and the Dynamos but this was quickly abbreviated.

They are pretty much famous for their single How Long and nothing else. The follow up single is also featured here. It bombed.
Lead singer Paul Carrack subsequently went on to perform a number of musical atrocities as part of Mike and the Mechanics.