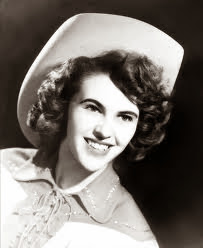 Although it's Friday and this post features the Queen of Rockabilly herself I hope I'm not stepping on Swiss Adam's toes as this is Wanda Jackson in Country mode
She crossed over from Rockabilly to Country around 1964/65 before returning to her roots around 1980 presumably coinciding with the rise of bands such as the Stray Cats.
She is now 75 and is still recording with her last album Unfinished Business produced by Justin Townes Earle released in 2012.
This is from 1968's Nobody's Darlin' which I got in excellent condition earlier this year from Oxfam in St Andrews.

Wanda Jackson - Tears at the Grand Ole Op'ry
Posted by Charity Chic at 15:00