Ryan Adams is perhaps the most famous artist ever to have featured in the Bloodshot stable.
I was familiar with him from his Whiskytown days and have seen him performing solo in Glasgow on a number of occasions.
First of was King Tuts in front of a couple of hundred folk. I also remember the QM Union after which my ears weren't right for a week and a sold out gig at the Barrowlands
There were probably others but I most remember the last time I saw him at the Carling Academy.
It was about £25 for a sitty down gig.
The boy came on, stoned out of his head, and during the first half of the concert played about 6 songs poorly and spent the rest of the time gibbering inanely.
I've no idea what the second half was like as I stormed out vowing never to have anything to do with him ever again.
Interestingly, the Glasgow Herald reviewer gave the concert 5 stars, confirming my suspicion that he had written it from the pub and had not bothered going.
About a year ago George texted me extolling the virtues of Heartbreaker (BS071) 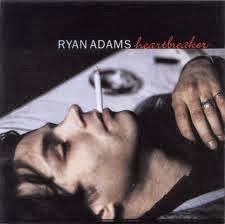 After much deliberation and pontification I finally relented and gave it another listen.
Somewhat reluctantly, I had to conclude that it is indeed a work of genius albeit a genius who has disappeared up his own backside

Ryan Adams -Come Pick Me Up