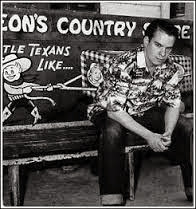 They say that if you play country music backwards your wife doesn't leave you , your child recovers from illness and your dog doesn't die.
Obviously nobody told this to Wayne "the Train" Hancock - here are two splendid tunes containing just about every country cliche going. Taken from the 1998 album on Ark21 "That's What Daddy Wants"
Recorded live and finished in three days and an absolutely cracking record.
Wayne himself was once on that fast bound train to oblivion before he managed to sort himself out.
I saw him once in Virgin records in Glasgow in the middle of the afternoon playing a couple of songs to largely uninterested passers by (and me!)
The only down side is that Governor George W Bush and wife get a mention in the list of thanks - hopefully for facilitating the music rather than the odious politics.