I Speak Because I Can 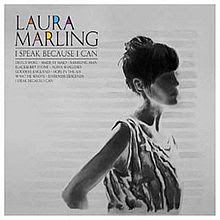 I quite like Laura Marling. However, she is one of many an artist who's music  I like but have never quite got round to paying hard cash for. I would however hoover up anything I saw in a charity shop.
She first appeared as part of the nu folk movement (an awful term)  in the mid Naughties first hooking up with Noah and the Whale and then with posh boys Mumford and Sons.
Fortunately for her she had the talent to survive these associations and continues to deliver consistently good and challenging songs.
I Speak Because I Can is her second solo album from 2010 produced by Ethan Jones an a Mercury Music Prize nomination.
Then boyfriend Marcus Mumford appears on drums and backing vocals but we won't hold that against her.

Laura Marling -Hope in the Air
Posted by Charity Chic at 08:00