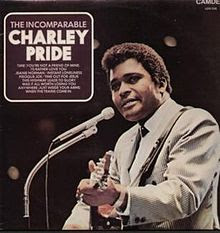 Yes, yes I know that I have featured some Charley Pride on vinyl relatively recently.(just checked it was the 25th of June so not quite as recently as I first thought).
However when Mrs CC came in with a couple of compilations by him at 50p a pop it led my to thinking that another airing was justified.
A compilation from 1972 the year after he was chosen as the artist of the year and the best male country vocalist  of the year by the Country Music Association and the top male country artist by Billboard and Cashbox.
His greatest accolade though will always be that he became the first black artist (and pretty much the only black artist) to be recognised as a major country and western artist.
His talent sure burst down a whole number of barriers.
Incomparable indeed.

Charley Pride - Was It All Worth Losing You

Charley Pride - This Highway Leads to Glory
Posted by Charity Chic at 08:00