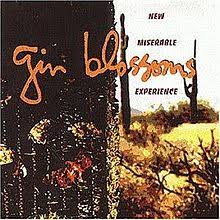 I was quite surprised to discover that Gin Blossoms  have never graced these pages before.
I've always had them filed under Americana. I mean with an album entitled New Miserable Experience why wouldn't you?
However whereas it definitely has a Country twang to it  these two songs which are probably their best known (to me at any rate) are more rockier and have a touch of R.E.M. about them.
They were both written by guitarist Doug Howard who was sacked towards the end of the recording of the album due to alcohol issues.Sadly just as the album was becoming a success towards the end of 1993 he committed suicide.
They made brief reappearances in 1996, 2006 and 2010 but they never reached the dizzy heights of New Miserable Experience again

Gin Blossoms - Found Out About You
Posted by Charity Chic at 08:00