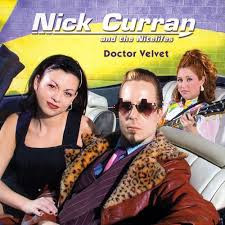 Nick Curran was an extremely talented blues singer and guitarist who died in 2012 from oral cancer at the tender age of 35.
He released 5 albums from 2000 to 2010 with his band the Nitelites. Dr Velvet is the middle one from 2003 on the wonderfully named Blind Pig Records from San Francisco.
He also played with The Fabulous Thunderbirds from 2004 to 2007 and in the band Deguello where he played the drums standing up.

Nick Curran & the Nitelites - Can't Stop lovin' You
Posted by Charity Chic at 08:00