A new, if hardly original, series for you today.
Bands with Sister(s) or Brother(s) in their title.
We will start of with bands containing actual brothers or sisters and see where we go from there.

We kick off with the Webb Brothers who are the offspring of the great  songwriter and pianist Jimmy Webb.
When I saw them in Austin and subsequently purchased their 2000 album Maroon there were only the two of them: Christiaan on vocals, piano and keyboards and Justin on vocals and guitars.They have subsequently been joined over the years by younger brothers James and Cornelius. 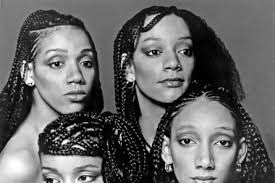 Another band who at one stage contained four siblings are the disco legends Sister Sledge.
At their peak they consisted of Debi, Joni, Kim and Kathy Sledge.
Kathy left in 1989 returning occasionally thereafter and  Joni sadly died in 2017
Here is the LP version of their classic We Are Family - all 8 minutes of it!

Sister Sledge - We Are Family