Who Sang That Song Again? 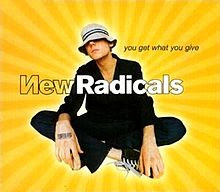 Many of you good folk out there will be familiar with this song.
However, I'll wager that most of you (me included) would be hard pushed to say who sang it

The New Radicals were an American band.Again I didn't know this associating the floppy hat on the  cover with the Verve, etc.

They were a one hit wonder band and if you acquire the 1996 album Maybe You've Been Brainwashed Too you can see why.
Purchased in the Fisherman's Mission in Mallaig (that's in Scotland George)

New Radicals - You Get What You Give
Posted by Charity Chic at 08:08