I was going to post this after the Maryhillbillys and the Notting Hillbillies but decided that the link was a wee bit too tenuous. 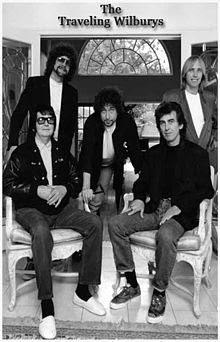 From left to right here are Lefty, Otis,Lucky,Nelson and Charlie T Jr Wilbury perhaps one of the ultimate super groups.
This is probably their best known and indeed best track from Volume 1 from 1998.
There 2nd and final studio album was Volume 3 from 1990 after Lefty/Roy Orbison's death.
There was no Volume 2 which apparently is a dig of sorts to a bootleg that appeared in between the two albums

Traveling Wilburys - Handle With Care
Posted by Charity Chic at 13:40