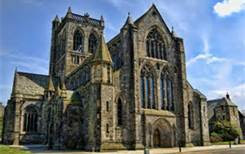 Tickets to see Karine Polwart at Paisley Arts Centre popped through my letterbox yesterday.
In addition to being excited at the prospect of seeing her in concert again it got me thinking that I have never been to a concert in Paisley before.
This in turn led to me thinking about which Paisley artists I have music from and it would appear that I have enough for a mini-series.
I'm not sure about the legality of running two series at once so unlike Mexican Monday this one will have no specific day and will pop up sporadically.
You can't talk about music from Paisley without paying homage to the Governor - the late great Gerry Rafferty.
Here is a track from 1977's City to City - not the ubiquitous Baker Street but something for more impressive.
The Stealers Wheel track is more ubiquitous and is posted not because of it featuring in Reservoir Dogs but because it also features fellow Paisley buddy Joe Eagan.
The joke at the time of Gerry Rafferty's funeral was that the ushers were saying to the mourners "clowns to the left, jokers to the right"!

Gerry Rafferty - Right Down the Line


Stealers Wheel -Stuck in the Middle with You