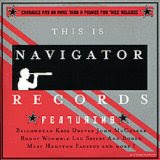 The solo track could well be a homage to the record label. He also has an excellent solo album Mark the Hard Earth which is worth purchasing.
Drever, McCusker and Woomble are a sort of Scottish Folk supergroup, I suppose, who got together to record the album Before the Ruin.
John McCusker is the baldie fiddler you see with Phil Cunningham and Ally Bain at Hogmaney and is also, I believe, a member of Mark Knopfler's touring band.He is the current Mr Heidi Talbot and the former Mr Kate Rusby.
Roddy Woomble is/was lead singer of Idlewild - I'm not sure whether they are still on the go.
He has also recorded  an album called The Impossible Song and Other Songs and was the curator of the Ballad of the Book project.
His missus was in Sons and Daughters and they were sitting in the row in front of us at a recent John Prine concert!

Drever, McCusker and Woomble - Silver and Gold
Posted by Charity Chic at 18:07