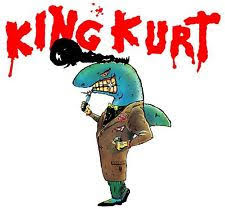 The great song Mack the Knife composed by Kurt Weill and with lyrics by Bertolt Brecht has been covered by many artists including the musical giants Louis Armstrong, Frank Sinatra, Bobby Darin, Robbie Williams ... and King Kurt.

The version by our psychobilly friends  appeared on their 1983 album Ooh Wallah Wallah which until now I didn't know was on Stiff and produced by Dave Edmunds.
A copy of the 12 inch was my only vinyl acquisition on my recent foray to Oxfam.
The second song Wreck a Party Rock sticks towards the end but I doubt that many of you will get that far.
There is an argument that I am too old for all this nonsense. Not one I subscribe to.